For 16 years, The Preemie Project has had the privileged of donating hats, booties and blankets to Iowa NICUs. We brightened up the NICUs with donations of cute holiday hats and costumes and colorful bedding for the tiny cribs.

After 16 years, we are shifting the focus of our mission. The Preemie Project will no longer be accepting donations of handmade items. We will be focusing primarily on purchasing and donating items for our Family Support Program. We hope we can continue to rely on the support of you, our volunteers to help us bring comfort and support to Iowa NICU families.

Starting February 1, 2021, The Preemie Project will no longer be accepting donations of handmade items. We will still have enough bedding and holiday items to last through most of 2021.

We will be shifting our focus to primarily NICU Family Support. That will be in the way of going home supplies for families experiencing difficulties due to unexpected NICU stay. We provide pack and plays, sheets, blanket sleepers, diapers, wipes, formula, footed sleepers, and other items as requested by the NICU Social Workers. 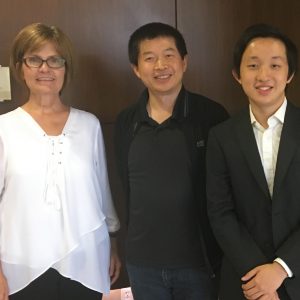 Many thanks to 16 year old Charlie Liu for a great weekend of music benefitting The University of Iowa Children’s Hospital and The Preemie Project.

Charlie was born 7.5 weeks early, and had a month long stay in the Intensive Care Unit of the University of Iowa Children’s Hospital. He understands the struggles of preemies and their families

Charlie’s first benefit solo recital at age 9 was a fundraiser for UIHC. Charlie had long wanted to give a benefit concert in his birthplace Iowa, but it was hard to get everything worked out. This year he was finally able to do it. The Preemie Project was very honored and to be a recipient of this benefit concert

This young man is so impressive!! We have to tell you a bit about him!!! When Charlie was three and half, he displayed exceptional finger dexterity and started learning piano at 4. At 6 he was invited to perform on the Ellen DeGeneres Show and won 1st place in Massachusetts state piano competition. Since then, he performed in all 3 concert halls inside the world-famous Carnegie Hall at only age 8, was youngest scholar selected by the Lang Lang International Music Foundation, performed on the Oprah Winfrey show’s season finale of “World’s smartest and most talented kids. Charlie has performed for such luminaries as Queen Rania of Jordan, Bono of U2, Huge Jackman, Alec Baldwin and many more. He has won more top prizes than anyone else in the top International/National Junior Piano Competitions in the USA.

The concerts were in part sponsored by Liu’s own “Rescue Music Foundation” http://rescuemusic.org .

Many thanks to Charlie for sharing his incredible talents and to his father, Mingyi Liu for facilitating this wonderful fundraiser. Charlie is definitely a rising star!

There is an article on the internet going viral right now. “People are crocheting octopuses to help premature babies”. The Preemie Project does NOT need donations of these crocheted octopuses for several reasons:

Thank you to everyone that sent this idea to us. We always encourage you to bring new ideas to us that you see. We are always on the look out for the next cute item for Iowa NICU babies.

Welcome to our new website! We have worked hard to condense the information and present it in an easy to understand format. We welcome any comments or questions.